American Authors: Oh What A Life –

COVER CD single
Peter J Blume’s trumpets are on the title track of this debut-album! 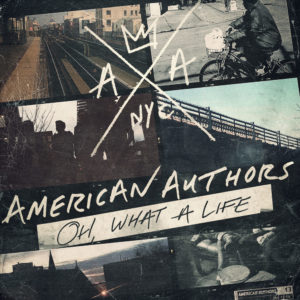 As you may or may not know, last summer I was hired by a certain high-end recording studio to go in & do some session work on 2 songs for a client of theirs. At the time, I didn’t even know who the artist was that I was adding my horns to—no surprise there, as I really don’t listen to much of “today’s music”. But as it turns out, the band is called the “American Authors” (formed while at Berklee College of Music, now based out of Brooklyn, signed to Mercury Records) & they are a current Indie-Rock/Pop band that apparently has already had several hits on the radio: their biggest one probably being “Best Day of My Life”–which was used on TV during the last MLB World Series, this past Winter Olympics in Sochi, etc…& Lowes Home Improvement Centers also picked up the song for use in their commercials.

Anyway, several months ago I received word from executive-producer Aaron Accetta that my horns were going to be included onto 1 (of the 2) songs, that is going on the album—which just got released earlier this month! The album is called “Oh What a Life”–& I am on the title track. Again, I can’t emphasize to you how much I really don’t like much of today’s music…but I can honestly say that the music on this album, & especially the song I am on (Oh What a Life), is extremely well done & REALLY kicks! Congratulations & much success to Aaron Accetta, his co-producer Shep Goodman, their entire team, & of course, the guys in the band.

As this is apparently the band’s 1st actual full length-CD album, ALL of their previous hits are also included on it. So in case anyone is interested, the album (or individual songs) is available on all the major download sites: Amazon, i-Tunes, etc…as well as in CD form.

P.S. About the other song that I did NOT make it onto: the song is called “Trouble”. As what may typically happen in the music ‘business’, I came up with an arrangement for it (2 trpts, 2 flugelhorns & 1 trb) , recorded it…& then the powers-at-be changed their minds & the direction they wanted for the song, so they went with a fiddle & a banjo instead. I may know music, but they certainly know more of what ‘sound’ is current! And I take comfort in the fact that at least I lost out to still REAL instruments (& not just some electronic sounding B.S.)!

For a sample of the horn arrangement I had done on ‘Trouble’, please visit the SOUND CLIPS section of MY MUSIC tab on my website. With a little guidance from Aaron, I then had come up a theme for my horns—kinda like in the vein of the music you hear in all the old-time ‘Spaghetti Western’ cowboy movies (Aaron Copland, Elmer Bernstein, etc)…but with a little ska or dixie-flavored dirge on the bone in the bridge! I wrote the arrangement (for 2 trpts, 2 flugels & 1 trb), played & recorded all the horns over an mp3 of the master-track (which I self-recorded at my own house), mixed it all down as best I could (it’s just a demo) & got it back to the studio within the deadline of only a few days.

To really hear the full panning effect of what I intended, try listening to it in headphones.

Thanks again for listening & for your interest!- PjB