For Peter Blume, a 20-year veteran of the Mount Pleasant Police Department, his album, My Classical Passion — on which Blume plays trumpet and trombone and handles much of the arranging and producing — is, at long last, finished. Blume said the record, which is released May 15, was some 40 years in the making.

“This was a natural progression for me as an artist. This [album] really is Mr. Holland’s Opus for me,” Blume says, in a nod to the 1995 film about a high-school music teacher focused on writing his own composition. 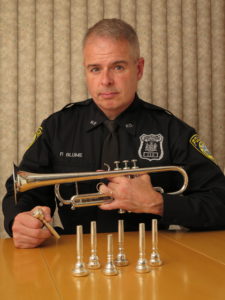 Amidst its worldly notes, My Classical Passion is very much a product of Westchester. The album is packed with nods to local figures who helped Blume learn to play as a child and later in life. It was recorded at Sweatshop Studios in Katonah, and the cover shows Blume and his trumpet at Kensico Dam.

Blume can often be seen onstage around the county, whether it’s playing the national anthem on his trumpet at Rockland Boulders and Hudson Valley Renegades games or taking the stage at bars, clubs, and area festivals.

But much of Blume’s schedule is focused on law enforcement. He says he became a police officer to help people, not harass them, and says he’s “honored to work for such a professional organization” as the Mount Pleasant Police Department.

Being a police officer was a factor in Blume’s tackling the album. He knows there’s no guarantee that a police officer returns home after a day of work, so he was focused on leaving behind something meaningful for his children, Emily and Jonathan, should that worst-case scenario ever play out.

“If I die tomorrow, in 20 years I would be a distant memory to my kids,” he says. “This is something they can take with them into adulthood. They’ll be able to hear that I had a passion — that I was fairly damn good at it. They can even hear me breathe.”

My Classical Passion can be purchased at Amazon, iTunes, and CD Baby. 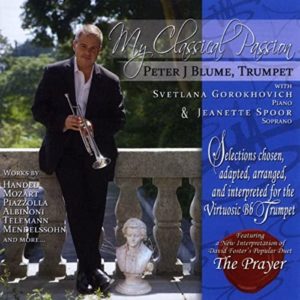